As kids we expect that our parents have already experienced every milestone we’re going to go through in life. There’s a sense of comfort in knowing that they can advise you on what’s next and how you should prepare. As a first-generation college student, this is far from the case. You are the first in your family to ever experience college life, and you have to figure it out on your own. There is a great deal of pressure to succeed because it’s not only about you. You’re also doing this for your family members who never had the opportunity to do this for themselves.

My family emigrated from Mexico more than 15 years ago. None of them were able to attain a college education due to countless obstacles. Moving to America meant I had something to prove. However, the odds were against me from the start. Children from lower income families and children whose parents never attended college have a lower chance of attending college themselves. I fit into both of these categories. Because of this, I grew up believing I would never go to college. It was as if it was written in stone. Initially, being an immigrant was what demotivated me. I let myself be a victim of circumstance, until I got to my senior year of high school. I began taking advanced placement (AP) classes.

Even though I wanted to believe I’d never go to college, it was like a part of me knew I wasn’t going to give up that easily. It was a constant internal battle of wanting to try, but then giving up for fear of failure. The determined side of me won and I signed up for three AP classes. In my mind, if I didn’t do well in these classes it was because I wasn’t cut out for college. To my surprise, I got some of the best scores possible. This motivated me to take the SAT’s so that I could apply to college.

It was frustrating trying to figure out how to study for so many different exams, while struggling with college applications. The hardest part was seeing all of my friends go away to college while I was left behind because I had decided to apply to college too late. Waiting a year before I could go to college felt like an eternity, but it was one of the best learning experiences. I was able to prepare for what was ahead and do research on how to navigate college. As a first generation college student, I think this was crucial to my success later on. 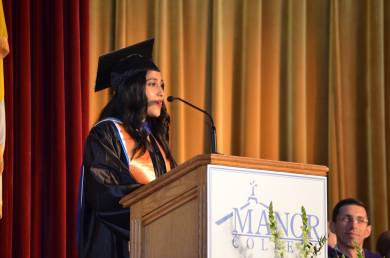 Being the first person in your family to attend college means you need a lot of support. When I finally told my parents that I wanted to go to college, they were very supportive. I didn’t expect to receive so much praise from them. This gave me the extra motivation I needed. Eventually, I attended Manor College, a two-year college, and then transferred to La Salle University in the fall of 2016 as a biology major and psychology minor.

Initially, being an immigrant and a first generation college student was what made me want to give up. Today, it’s what I’m most proud of.

It’s not about competing with others, but about striving to do better than my previous work. I’m proud to say that among all of the obstacles, I made a future for myself and my family. Anytime I start to feel like I can’t go forward, I look back at everything I’ve overcome so far. It’s daunting looking ahead and seeing all that you have left to accomplish. Instead, look back and appreciate what you’ve done so far. Taking the leap to attain a college education means I’ve paved the way for future generations in my family to do the same.

Looking for a way to pay for college? Read my post on how I received the Jack Kent Cooke Scholarship!

4 replies to Going to College as a First Generation Student

Keep these things in mind if you're transferring for next semester! Search "January" on our blog: Transfer-Ways.com 🔄 #collegetransfer
Don't forget these gifts for the organization nerd on your list! Search "gift guide" on Transfer-Ways.com #giftguide
Need gifts for your professor, supervisor, or advisor? Search "gift guide" on Transfer-Ways.com to view our gift guide! #giftideas
Transferring can be frustrating, challenging, and discouraging. This post will help you get through it all! Link in bio 🔄 #transferways
Keep your head up! #determination #hardwork
😊😳😩 #summer #transferring
Check out this cool infographic that compares a transfer student's path to graduation to a non-transfer student's path! Want to read the blog post? Search "comparing college" on our blog; link in bio. #graduation #transferstudent
Looking for something to do this summer? Write a guest blog post about your transfer experience! Email us at TransferWays@gmail.com #summer #transferways #guestblogger
Wondering what to do this summer? Be productive with our tips! Search "summer" on our blog (link in bio) ☀️💻 #transferways #summer